Play Age of the Gods Free!

Play Age of the Gods at these Casinos!

Age of the Gods Review

Age of the Gods

Age of the Gods is themed around Olympus and the 12 Greek gods, which call it home. The all-powerful deities of Greek mythology waged wars and struggled for power over one another.

It was the cutthroat religion, which ruled the ancient world on the back of the Greek armies. Rome had the same deities, with different names and attributes. But there is no denying the real and fictitious power of these immortals held.

Age of the Gods is developed by Playtech. They are a great developer, renowned for the aesthetics in their game. Think polished animations and crisp graphics and that is thinking like the good people at Playtech.

They hail from Tartu, Estonia and are now based in the Isle of Man. They have been making games since 1999, which puts them in the first wave of companies to start making pokies. They are a large company with 3500 employees, all over the world, so a good game is expected.

The company always discloses the theoretical return of all their games. They offer about 400 games, not all of these are pokies, but it is still a good indication as to the size of the company.

Age of Gods has a striking background and it is the first thing a player will notice, once the game loads. It is a nice looking pokie, with a clean interface. The background image is just blue, with a slight gradient, and contrasting red mountains.

Simple but effect, this 5×3 pokie is dressed to impress. The high value symbols are everything one would expect in an ancient Greek themed pokie. Pegasus, boats, and pottery all sit on the reels, alongside generic numbers and letter symbols.

On top of the reels, the game’s progressive jackpot wins are displayed and the panel is under the reels. The buttons in the panel are written in a Greek font. It is a neat and tidy panel, which works well with the theme, and houses all the games controls.

As displayed proudly on the side of the pokie, there are twenty paylines. The game is played by wagering on a spin, pressing the spin button, and then waiting to see if it lands a win. The player’s bet is multiplied by the value of the win, to calculate a currency value.

When the player spins the reel, what is actually happening is a pseudorandom number generator is pulling a random configuration of symbols from some tricky code. The spinning reels are just an animation, and once they stop, they land in predetermined positions. If by chance the player has lined up matching symbols across adjacent reels, in accordance with the Paytable, they win.

Age of Gods has a free spins feature, which is triggered by landing 3 or more Age of the Gods symbols anywhere on the reels. Before the free spins are awarded, the player chooses between 20 coins.

There are the gods Athena, Hercules, Poseidon and Zeus. The player will be taken to a different free spins feature for each, when they match three of the relevant god’s coins. The player is given 12 free spins in each, but each game has its own features.

This game is plugged into Playtech’s progressive jackpot and there are some massive winning up for grabs. There are four jackpots: Power, Super Power, Extra Power and Ultimate Power, ordered from highest to lowest. Prizes range from tens of dollars to hundreds of thousands of dollars, and are all displayed above the reels.

This is a great looking game, with a godlike theme. There is a free spins feature with variations for each of the gods and it has four progressive jackpots, ranging in size from a modest win to a life-changing win. Players will enjoy this new title from Playtech. 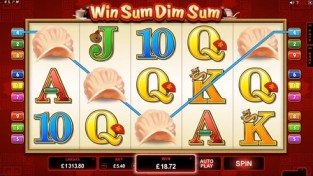