Play Peek A Boo at these Casinos!

Peek a Boo is a Halloween themed pokie. November is long behind, or in front of us. But players can still appreciate this games, as a pokie with a playful ghost and candy theme. There is a ghost catching element to this pokie and the appearance of the payline, suggests that the player is trapping ghosts in their wins.

Microgaming developed the Peek a Boo pokie game. All online pokie players, should be know the work of Microgaming. They have a range of titles and are one of the biggest online pokie developers out there. They claim to have released the first genuine online casino in 1994. There game are simple to play, normally have lots of paylines and impressive jackpots.

Peek a Boo, is a five reel pokie. The colour scheme is a dark blue. There is no background image, it is just blue, and this is quite a simple pokie. It is not ugly, but there is nothing particularly aesthetically pleasing about this pokie.

The panel is located at the bottom of the pokie, and a Free Spin Meter is of the right side of the reels. The Free Spin Meter fills with a light blue plasma like liquid which is similar to the paylines. This is to do with the theme. Ghosts are tapped in this meter and it rewards free spins. More about this in the “Bonus Features” segment.

Spin the reels with the Spin Button, located in the middle of the panel. There are 40 ways to win the base game, and wins are played left to right. The base version of this game is simplistic and even a beginner will have no problem understanding, the simplistic game mechanics.

Peek a Boo has a free spins game mode. It is unlocked by making paylines and collecting ghost in the free spins meter. Ghost are zapped with the Ghost Zapping symbol on reel three and zapping 10 or more ghosts unlocks up to thirteen free spins.

The Spooky Respin feature can only be triggered in the base game. On a three spin or four symbol win. The reels will spin again, granting the player an additional chance, at landing the needed symbol to add to their win.

The Peek a Boo symbol is a Wild Symbol that stacks on all reels during the base game and super stacks in the Free Spins Game, on reels four and five.

At max bet the highest five in a row symbol, the Peek a Boo Symbol, wins the player 2500 coins, a decent figure. Bear in mind that in the Free Spins mode super stacks the Peek a Boo symbol on the fourth and fifth reel.

Peek a Boo is not the prettiest pokie but it has an impressive arsenal of features. The Free Spins mode has a lot of pay lines with super stacked Wilds on the fourth and fifth reel. This game will stretch a players bankroll with its big winning potential. And the Spooky Respins feature gives players another chance at that big win. 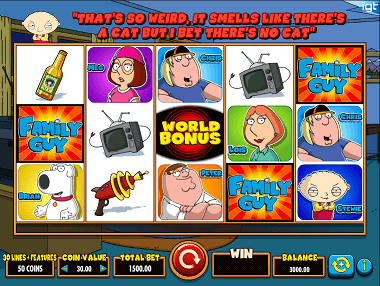