Play Rumble Rumble at these Casinos!

Rumble Rumble is a game that’s inspired by bull fighting, the noise that is described in the title being a description of what you would hear when a herd of bulls would be running towards you.

A game that’s part of Ainsworth’s collection, Rumble Rumble delivers all sorts of mythical creatures alongside the Fire Bull that is in the main role, and the overall effect seems to be a mix between bull fighting and fantasy.

For the symbols of Rumble Rumble, the list starts with the Wild Logo, then the Fire Bull, wild and regular Coins, wolves, hawks, horses, deer and the Royals that range from 9 to Ace.

Ainsworth is a company that’s originating from Australia, a developer that seems to be better known for their work in the brick and mortar side of the casino industry, rather than for their online pokie machines.

They do have a collection of games that are available to be played online, and Rumble Rumble is a good example of what they offer in this space. They’re not bad games, they have their share of features and decent graphics, but they’re not among the best you will usually find either.

The game seems to be mainly designed for a mobile device, so it’s very tall and doesn’t display well on a desktop PC, which needs a lot more width. The design style is one that I’m not impressed with unfortunately, but there are some well made symbols in there as well.

You get Wild symbols in this case, shown as logos of their own word, and capable of substituting for the symbols that get to form typical combinations, so not useful where the Fire Bull, Wild Coin or scatters are involved. You use wilds for their own combinations as well, and they pay up to 50 coins when this does happen.

The Wild Coin is also a substitute, but at the same time it can be used as a scatter as well. It can replace any other symbol in the game, the Fire Bull being the exception.

You can see the Fire Bull symbol on the reels 2 and 4. Those are reels that have some positions with a blue outline around them. If a Fire Bull lands in one of those spots, then it is transformed into a wild symbol and will be used as such for that round.

The scatter symbols are the ones that will be used to get you 8 free spins, with reels having 9 positions now, instead of the original 3.

There is an average RTP in this game that is at just over 94%, with the top payouts bringing you up to 10,000 coins apparently, from combinations formed by the Wild Coins.

Rumble Rumble can be an interesting game, especially if you look at its features, but I’m far from happy with the way its graphics look. 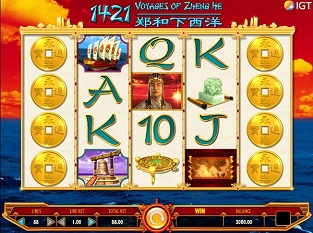