Play Silent Movie at these Casinos!

Can you imagine living at a time with no internet, cell phones, TV or even air condition for these hot summer days?

That era may seem distant today, but it was only a hundred short years away when humanity was starting to scratch the surface of the technological wonders. The modern marvels of everyday life we enjoy today are the perfect showcase of how fast we have advanced over a relatively short period of time in terms of technology.

Silent Movie is the perfect reminder for what life was like in the early 1900s, when the only place you could watch anything like the movies today were overcrowded cinemas. The black and white picture and no dialog among actors on the early Silent Movies are perfectly transcribed to the smallest details on the reels of the Silent Movie pokie.

It’s very unusual and interesting to see a black and white design for a modern video pokie game, but the entire visual mix was perfectly done, making Silent Movie a truly state of the art video pokie game.

The blockbuster silent movies from the past century are brought live to the reels thanks to the ingenuity and hard work by the designers at IGT.

We were really surprised to try out their latest pokie project and can only find words of praise for their efforts. We hope this ingenuity in design will find its purpose on many more future pokie releases by IGT.

Despite the unusual theme and visual design, IGT decided to keep their classic 30 pay line system, with the standard 5 reels and 3 rows. This system allows for the bet levels to go from $0.30 up to $90 per spin.

If you like the game design, theme and the black and white combination used, the bonus features that Silent Movie has to offer will totally blow you away.

Players have a chance to trigger not one, not two, not three, but 4 Free Spins bonus rounds in total. Not too many pokie games online can brag with the same offer of features as Silent Movie, considering that they are all Free Spins bonuses.

Since the theme for this pokie comes from the blockbuster movies from the early 1900s, each free spins bonus is designed around a corresponding movie title and separate symbols pay table, apart from the base play symbols.

After the bonus is awarded a short cinema projection is set in motion and the player needs to make a choice between booths to reveal the free spins number for the upcoming free spins bonus.

Players will be awarded with anywhere from 3 to 6 free spins in total, accompanied by a decent x3 multiplier, if the characters of Dr. Jekyll & Mr. Hyde are revealed on the Film Bonus symbol.

Even though this number is small, only winning spins will count. The Dr. Jekyll & Mr. Hyde Win Spins feature also has a double face Jekyll/Hyde symbol, which substitutes for the two corresponding symbols.

A Trip to the Moon is a famous scene which was used in many videos in our age, recognizable by the rocket that lands in the Moons Eye. In this feature a number of 10 to a maximum of 15 free spins is awarded and the option for an extra wild symbol to land on the reels in any spin.

Players will get from 6 to 12 free spins, in which the Wild and Mabel symbols also add as scatters, awarding payouts according to the pay table. The maximum win in one round of this bonus is set at a high 250 x total bet.

The Keystone Kops Multiplier Boost Bonus is the only free spins mode where the number of free spins is fixed at 10.

Here the multiplier number is random and can be anywhere from x2 to x5 for the first half of the free spins. On the sixth free spin, the multiplier value is doubled and can from x4 up to the maximum x10.

Trying Silent Movie for real play was a real enjoyment. The designers did a great job in every possible aspect of the game and no room was left for errors.

We can only say that Silent Movie deserves to be tried for real play and can be very rewarding with some luck on your side. 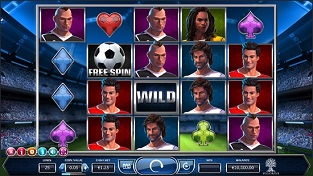